It started out as a pipe dream… a not-for-profit Magento conference that appealed to Magento developers, and not just the sales and marketing people. An opportunity to connect, contribute, and collaborate with our community. A chance for Magento agencies to learn from each other without competing. A platform for accelerated learning and setting global standards.

Fast-forward a few years and we’ve just hosted our fourth Mage Titans in Manchester. In fact, our ‘pipe dream’ was so well received that it’s been rolled out in four other countries (with more on the horizon), educating attendees from the USA, Mexico, Italy, and Spain, as well as on home ground.

Mage Titans has built quite the momentum, allowing us to secure internationally-renowned speakers and fill out venues with a strong army of open-eared and eager attendees.

Over the last few years, we’ve created a guideline of fundamentals for other companies to follow, a franchise if you like. Although Space 48 still play a part in the organisation of each event, we’re enjoying taking a back seat. We want other companies to make each event their own, change it up, stretch it out, and in doing so, we work together to help Mage Titans evolve and continue to improve! But there’s one thing we can’t yet loosen the reins on, and that’s Manchester, our baby. Check out our overview of Mage Titans Manchester 2017…

With lots of people traveling to Manchester ahead of the conference, there is always a demand for a pre-event the evening before. This year, we strayed away from the usual workshop and hosted a Dev Exchange and panel at our new Manchester office. Quickly filling the 70 spaces we had available, Mage Titans ticket holders were keen to get warmed up for the main event and discuss best practices with our panel including one guest all the way from São Paulo, Brazil! Listening and chatting to peers over pizza and beer was the perfect way to kick-start an epic weekend. 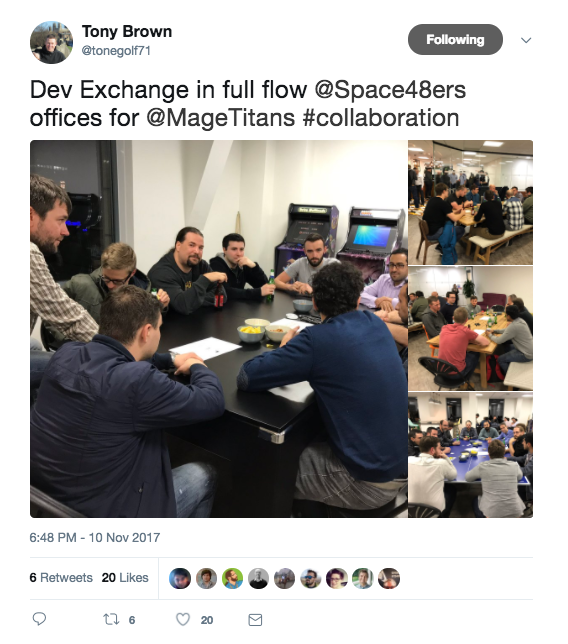 Next up, the main event. Alongside our day jobs, we’ve been super busy organising Mage Titans Manchester with the help of our awesome event partners, Manchester Digital. A lot of time and effort had gone into making it even better than the last one and it’s so rewarding to receive confirmation from attendees that we pulled it off. The feedback we received on the day and on Twitter has been phenomenal and with over 270 tickets sold, we broke records in terms of attendance!

Trialling a new format (based on community feedback), talks were shorter and more concise, ranging from 15 – 25 minutes. This meant that content was highly valuable and speakers often included links for some follow-up reading.

The day was hosted by our good friend and Magento Evangelist, Ben Marks, who managed to smoothly MC the whole day and keep us entertained. We also decided to share the wealth. We wanted to make Mage Titans accessible for people who couldn’t make it, so we LIVE streamed all of the talks via Twitter Periscope!

With such a strong response to our call for papers, Space 48 Technical Director and Magento MasterTony Brown had the difficult task of narrowing it down to 15 speakers. Having painstakingly chosen speakers based on the quality of their submissions and variation in topics, the line-up featured both first-time speakers and well-known experts, such as Vinai Kopp and Fabian Schmengler.

The speakers talked about their experiences with Magento 2 and their learnings, with more of an emphasis around testing and front-end development than in previous years.

Round of applause for the speakers…

Having learnt a great deal, we headed to the after-party to finish the day in typical Titan tradition – networking, drinking and posing in a photo booth! So, Mage Titans was our idea, but we’re certainly not taking all of the credit. We have our amazing sponsors to thank for supporting the event and of course, our speakers and attendees for making it possible.

Not yet attended a Mage Titans event? Check out the official photos here and don’t miss the videocreated by Rebecca Brocton for a real taste of what fun to expect!